Pressure regulators are closed-loop mechanical devices that maintain a pressure setpoint in various processes within a system. They are available in mechanical or electronic versions, in digital or analog models. Although analog devices have long been the traditional choice, digital proportional control provides significant advantages for many applications. Here, we will explore what digital versus analog means in terms of electronic pressure controllers, discuss the differences, and highlight some of the many benefits of digital electronic pressure controllers. 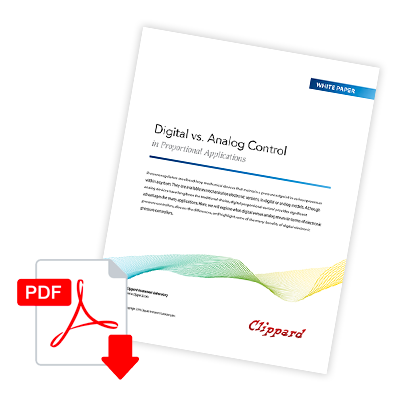 The second element characterized as analog or digital is the communication method used between the controller and electronic pressure regulator. There are many different protocols for communicating a pressure setpoint. However, they all fall into the two primary buckets of analog or digital. The earliest electronically controlled pressure regulators were analog devices called current-to-pressure transducers, or I/Ps (read: I-to-Ps) for short. In these devices, a current signal ranging from 4 to 20 milliamps would tell the I/P transducer to output a pressure ranging from 3 to 15 psig. For example, a 16 mA current signal would result in a 12 psig pressure output. These instruments were not closed-loop, and they were delicately balanced through great effort and could easily fall out of calibration. That said, the 4 to 20 mA protocol is still prevalent today. Modern electronic pressure regulators with analog input tend to use a 0 to 10 volt analog input signal. Voltage signals are easy to generate, available in a wide variety of industrial control devices, and simplify the mapping of voltage to pressure. Analog signals are an easy way to start controlling an electronic pressure regulator, but they are vulnerable to electromagnetic interference.

Much like Morse code, digital protocols employ a series of discrete pulses representing either one or zero bits to transmit information, eliminating potential damage from electrical noise. A wide variety of digital communication protocols exist, from SPI and I²C (I-Squared-C) to RS232 to modern industrial serial protocols like EtherCAT and IOLink. One thing that all of these have in common is their immunity to electromagnetic noise. They also facilitate a much richer command set and feedback on process status information. However, digital protocols are more complex, requiring a steeper learning curve.

Finally, digital versus analog can also refer to a particular device's control technology. Is the circuitry all analog, or is a digital microcontroller managing the operation of the electronic pressure regulator? Can digital devices provide the same control as analog, and are there practical reasons to choose digital over analog? In this paper, we will explain how microcontroller devices can replace analog technology and provide configurable functionality that enables users to specify the dynamic performance of the valve and adapt its characteristics to various application conditions.

For the purposes of this discussion, the definition of response time will be the time required for the controller to achieve the maximum power output to the valves in response to a change in command or operating conditions. Generally speaking, an analog controller will react to such changes significantly faster than a digital microcontroller will. So it would be logical to believe that analog electronic pressure controllers have better response time than digital ones. However, the time necessary for the controller to respond is small compared to the time it takes for the valves to respond to the controller or for the volume to achieve the desired pressure. So practically speaking, response time is not a significant factor in deciding whether to choose an analog or digital controller. 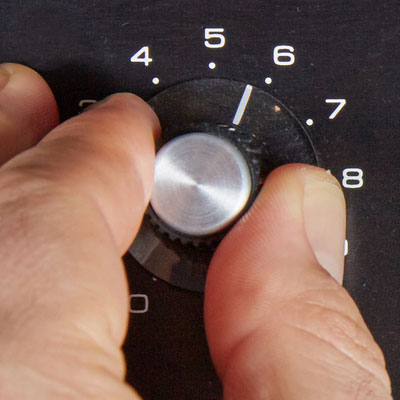 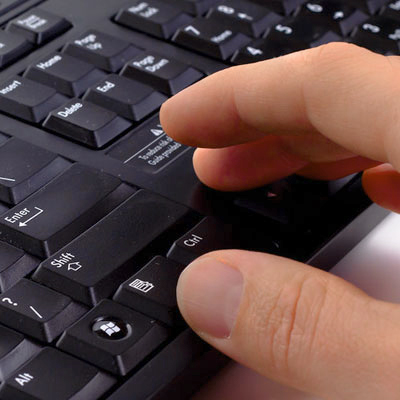 Calibrating and tuning proportional controllers requires adjusting PID (proportional-integral-derivative) settings to dial-in valve performance for specific process conditions. With analog devices, this modification is performed manually by rotating potentiometers until the unit achieves the desired behavior. Digital PID parameters install via a software interface and a few keystrokes. Initial application tuning of both technologies invariably requires some trial and error to optimize a valve's performance. However, we will explain how the microcontroller excels when custom calibrations like offsets and inversions are required.

Most proportional controllers receive a calibration of zero to some number indicating a range of pressure, flow, or force to control. This range is proportional to the signal used to command the device. For example, a typical calibration states 0 to 10 VDC equals 0 to 100 psig. In this example, a command of zero volts will cause the pressure controller to bring the output pressure to zero. In some processes it is essential to have some amount of pressure downstream at all times. In such cases, an offset calibration—like 0 to 10 VDC equals 10 to 100 psig—is prescribed. Alternatively, calibration may need to be inverted; for example, 0 to 10 VDC equals 100 to 0 psig. For analog controllers, these calibration changes are laborious and require cutting existing traces, rerouting wires, modifying hardware, soldering, desoldering, and more. Just one of these modifications necessitates a return trip to the factory. However, altering the calibration of digital controllers is as simple as editing a couple of numbers via the software interface. A task easily performed in the field.

Some pressure control applications are static and require only simple pressure control in a closed volume. However, many applications are dynamic with varying inlet pressures, leaks, setpoints, volumes, and back pressures. Finding a set of PID values that keep an analog electronic pressure regulator well behaved across all of these dynamic conditions can be difficult, if not impossible. A digital pressure controller can change its PID values at any time through a technique called gain scheduling where the microcontroller selects different PID values from a preset menu, so to speak, based on real-time changes in operating conditions. In this way, the digital microcontroller can achieve better stability and repeatability over a wider range of operating conditions than an analog controller.

PID security is another advantage of microcontroller operated products. When the factory-tuned PID settings create undesired controller behavior under particular conditions, a person might try to tamper with the analog controller's PID potentiometers. That can often create bigger problems. Once the PID settings are changed, it is difficult to get the unit back to factory calibration. Microcontroller PID changes, on the other hand, require a digital interface that keeps track of all the modifications to the PID settings. Not only does this provide more accountability, it also gives a means to get back to the factory settings if the new PID values do not work as expected.

Additionally, digital proportional pressure controllers can reduce energy costs and audible noise. Most analog proportional controllers require a bleed—a very small downstream flow—to operate well. This constant bleed is what allows the internal valves to achieve high resolution, but it also consumes media and increases ambient noise levels. Some digital controllers employ proprietary algorithms and custom PWM (pulse-width-modulation) frequencies to produce high-resolution control without a bleed orifice. Compressed air is costly enough to produce, but introduce oxygen or helium into a process, and the cost of energy to compress these gases becomes pricey if a constant bleed exists. If the gas is one that cannot escape into the atmosphere, a bleed orifice is out of the question.

Most modern-day proportional controllers can be configured to accept various sensors as direct or indirect feedback, enabling the pressure control apparatus to control flow, pressure, or force at a critical point in the process. For analog controllers, the external sensors must be analog as well, which both limits the options available and exposes the pressure control system to problems with electrical noise. Further, the feedback signals from the external and internal sensors are often in conflict, creating instability and oscillations. 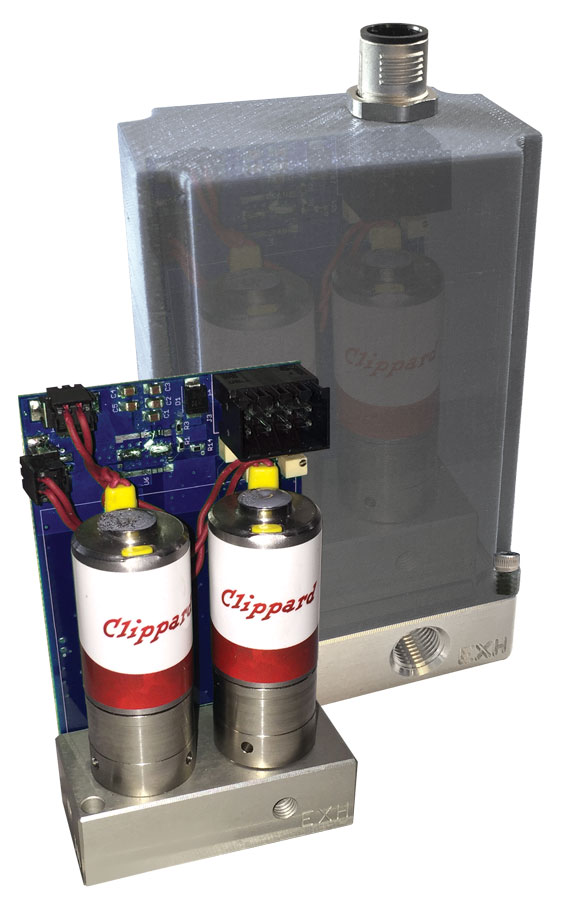 On the other hand, proportional microcontrollers easily pair with both analog and digital sensors using I²C, SPI or other digital protocols. Because of the flexibility of digital control, the external feedback sensor, once paired with the controller, holds complete authority as the reference against the commanded setpoint. This eliminates all potential conflicts with the onboard sensor, resulting in much better stability and accuracy. Also, since there are numerous flow and pressure sensors available with different power demands for operation, a microcontroller can be configured to deliver the precise excitation required from the sensor of choice, adding another layer of adaptability for micro-controlled proportional devices.

So digital controllers give the designer a wider array of external sensors and transducers to choose from—but why are external sensors used, and how can they add functionality to a process?

The valves employed by proportional controllers range in orifice diameter, but most are between 0.009" and 0.100". The size of the orifice directly relates to the maximum flow potential of the device. Flow is critical to every application, and many processes require much higher flow than the maximum orifice size available. Air piloted mechanical regulators increase flow potential for electronic proportional controllers when standalone flow capabilities are ineffective. An analog or digital controller pilots the appropriate sized mechanical regulator by controlling pressure to the dome. The force created above the diaphragm naturally dictates an equal force underneath the diaphragm, which allows for higher-flow pressure control with remote adjustability. However, every mechanical regulator has hysteresis and inaccuracies that result in immediate pressure drop and some percent differential between dome pressure and actual pressure. The signal from an external pressure transducer installed downstream of the mechanical regulator enables the electronic pressure regulator to control the mechanical regulator's output to the desired pressure. With a proportional microcontroller as the pilot, dome pressure becomes irrelevant—increasing and decreasing with the sole intention of satisfying the external sensor.